Kinect-style RGB-D cameras have been used to build large scale dense 3D maps for indoor environments. These maps can serve many purposes such as robot navigation, and augmented reality. However, to generate dense 3D maps of large scale environments is still very challenging. In this paper, we present a mapping system for 3D reconstruction that fuses measurements from a Kinect and an inertial measurement unit (IMU) to estimate motion. Our major achievements include: (i) Large scale consistent 3D reconstruction is realized by volume shifting and loop closure; (ii) The coarse-to-fine iterative closest point (ICP) algorithm, the SIFT odometry, and IMU odometry are combined to robustly and precisely estimate pose. In particular, ICP runs routinely to track the Kinect motion. If ICP fails in planar areas, the SIFT odometry provides incremental motion estimate. If both ICP and the SIFT odometry fail, e.g., upon abrupt motion or inadequate features, the incremental motion is estimated by the IMU. Additionally, the IMU also observes the roll and pitch angles which can reduce long-term drift of the sensor assembly. In experiments on a consumer laptop, our system estimates motion at 8Hz on average while integrating color images to the local map and saving volumes of meshes concurrently. Moreover, it is immune to tracking failures, and has smaller drift than the state-of-the-art systems in large scale reconstruction. 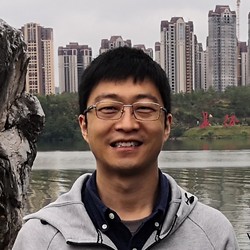